Polish president Andrzej Duda and King of the Netherlands Willem-Alexander paid tribute to Gen. Stanisław Maczek and his soldiers in Breda on the occasion of the 75th anniversary of the city’s liberation by the 1st Armoured Division. After the parade, director of the Polish History Museum Robert Kostro presented the PHM’s exhibition General Stanisław Maczek and His Soldiers to the president and the first lady.

Mayor of Breda Paul Depla emphasised that the city’s residents were grateful to the veterans for the liberation. He also announced that the General Stanisław Maczek Memorial would open at the Polish Honorary Military Cemetery in 2020.

‘Today, Breda is showing respect, gratitude and happiness. Respect for the fighters of General Maczek’s 1st Polish Armoured Division and all honorary residents of Breda; gratitude for the friendship and love that sealed the bond between Breda and Poland after the war; and happiness as we can live in the Netherlands, free thanks to all our allies,’ he said. ‘We thank you, the Poles,’ were the mayor’s closing words said in Polish.

Recalling Breda’s liberation, Captain Edmund Semrau told the journalists that he had been happy to see the Dutch welcome the Poles in the streets on 29 October 1944. ‘I was proud of those white and red flags, that was uplifting. The first impression was that I was coming back to a Polish city as there were white and red flags in the windows, as well as signs “We thank you, the Poles”,’ he said. 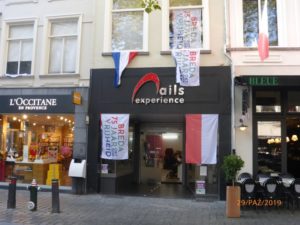 Referring to the presence of the Polish president and the King of the Netherlands, Capt. Semrau stressed that the ‘Maczeks’ had been finally appreciated. ‘Today, I feel satisfied. So many years have passed and the dust has settled, one forgets many details, and now I am getting closer to where Maczek is, he owes me a pack of cigarettes after all,’ he joked.

Also on Tuesday, as part of the observance of the anniversary of Breda’s liberation, a ceremonious military parade took place to commemorate the Polish soldiers. President Duda and King Willem-Alexander were there to receive it jointly from the steps of the Breda townhall, where they greeted the participants and held occasional addresses. The president also visited the outdoor exhibition General Stanisław Maczek and His Soldiers.

The 1st Armoured Division was established on 25 February 1942 on the order of the Commander-in-Chief Gen. Władysław Sikorski. Following intensive training as part of the 1st Canadian Army, it went to fight in the western front opened in June 1944. The formation played a vital role in the battle of the Falaise Pocket, closing off the encircling of the German 7th Army and 5th Armoured Army in the so-called Gap. The victorious march of the Division under Gen. Maczek’s command took it through northern France, Belgium and the Netherlands.

A city in North Brabant founded in the 13th century under a municipal charter, Breda is still called the most Polish town in the Netherlands. During the Second World War, it was an important transport hub, which is why the Germans – occupying the country from May 1940 – established a strong defensive bastion there against an attack of the Allies. At the same time, the shortest route to control the estuary of the Meuse (one of the tasks of the Polish Armoured Division) led via Breda. The Poles had to engage as many as three German infantry divisions in combat. After bitter fighting, the ‘Maczeks’ took control of the city on 29 October 1944.

„Russification” as a set of means to keep the Empire

Hanka Ordonówna - from the stage to a Soviet labor camp

The bumpy road of a star of the Polish stage