Prepared by the Polish History Museum in cooperation with the National Centre for Culture, the exhibition Enigma: A Riddle Solved will be on display at the NCC’s Kordegarda gallery at Krakowskie Przedmieście St in Warsaw on 9-28 November 2021.

It will involve Poland’s first-ever presentation to a wide audience of an exhibit that documents a great success of the intelligence service of the Second Polish Republic: a replica of the German Enigma built by Polish intelligence and applied in military operations. After the war, the Polish copy of Enigma became part of the collection of the Piłsudski Institute of London, and in 2020 – thanks to the support of the Ministry of Culture and National Heritage – it was purchased by the Polish History Museum and is one the most precious objects to feature in the institution’s permanent exhibition.

A work of Polish cryptologists and engineers, the Enigma replica used to break German ciphers is something unique on a global scale: the only surviving object of its kind made available to the public and researchers. The exhibition features both the description of the exhibit’s history and the road leading the Poles to the successful solution of the riddle of the German cipher machine.

Breaking the code of Enigma already in December 1932 was a great success of not just Poland’s Cipher Bureau and the cryptologists working there, but also of Polish science. Three mathematicians from Poznań University – Marian Rejewski, Jerzy Różycki and Henryk Zygalski – carried out a mathematical analysis of German ciphers and developed a system allowing for reading messages encrypted by Enigma. That was, however, only half the battle. Given that the Germans were constantly perfecting the machine and encryption procedures while Polish intelligence was intercepting a wealth of information, more and more people had to be involved in the practical use of the acquired knowledge, and from a certain point –  machines had to be built to support the Polish cryptologists in their work.

It was then that engineers from the Warsaw-based company AVA set up by Polish intelligence – in particular Antoni Palluth, Edward Fokczyński and the brothers Ludomir and Leonard Danilewicz – began to play the key role. Instructed by the cryptologists, they built machines supporting the cipher breaking process, the cyclometer and the cryptologic bomb. They also produced approx. 50 Polish replicas of the German Enigma, constructed with no knowledge of the German original and merely on the basis of theoretical knowledge on its operational principle developed by the Polish cryptologists. The construction of several dozen replicas was necessary to speed-read the German dispatches – and the cryptologists could focus on the cipher breaking itself.

Once the Second World War broke out, almost all Polish Enigma replicas were destroyed so as to erase the traces of Polish intelligence’s operations. Most of Cipher Bureau staff members managed to reach France, where they resumed their work. It was just in a secret facility located in the Vichy Free Zone that they built the replica showcased at the exhibition Enigma: A Riddle Solved. It was constructed as a collaborative effort of the Polish engineers with the French. It is a unique exhibit as just a handful of such devices were made in France. After the war, the copy became part of the collection of the Piłsudski Institute of London, and in 2020 – thanks to the support of the Ministry of Culture and National Heritage – it became property of the Polish History Museum, where it is going to feature in the institution’s permanent exhibition. 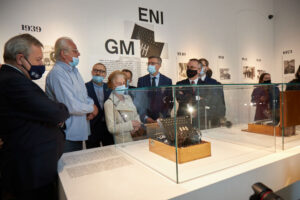 Next to the machine made by Poles, also another Enigma will be shown, used by German land forces as of the early 1930s. Comparing them, one can see that the Polish engineers were not familiar with the look of the German original, as evidenced by some easy-to-spot construction differences. At the same time, the Polish replica has all the functionalities of the original. Using such machines, Poles and the French decrypted German wires during the war.

Additionally, the exhibition will also feature a short film entitled Enigma. Mamy nowiny [Enigma. We’ve Got News](produced by the Arma Civitatis Foundation; screenplay and direction: Norbert Rudaś). It presents some new facts related to the breaking of Enigma, based on the files made available by French intelligence in 2016. The narrators are internationally recognised experts on cryptology and Enigma’s history − Dr Marek Grajek, Sir Dermot Turing and Prof. Philippe Guillot.

The exhibition will be accompanied by the premieres of two podcasts and a film on YouTube. The materials have been developed with the involvement of the Enigma specialist Dr Marek Grajek, a cryptologist and author of numerous historical publications and books, as well as historians from the Polish History Museum Michał Nałęcz-Nieniewski and Grzegorz Rutkowski, the curators of the exhibition Enigma: A Riddle Solved.

The exhibition enjoys the honorary patronage of the Minister of Culture and National Heritage Prof. Piotr Gliński.

Support: Office of the Niepodległa Programme

Stanisław August Poniatowski, the King Who Wanted to Repair the Commonwealth

The November Uprising: More Than a Romantic Rebellion

The outbreak of the November Uprising