Jan Sehn (1909-1965) was a Polish lawyer and professor at the Jagiellonian University. Shortly after the war, he conducted research at the former Auschwitz-Birkenau concentration camp and also participated in preparing accusations against several dozen German war criminals who had worked at the camp. Additionally, he published a number of scientific papers on the functioning of the concentration camps.

polishhistory: The biography of Jan Sehn would definitely make a good feature film.

Dr. Filip Gańczak: Indeed. Fritz Bauer, a German attorney of Jewish descent, and another well-known Nazi hunter – incidentally, working closely with Sehn in the sixties – has been the subject of two feature films made in the last decade.

Yet, Sehn remains a forgotten figure. Why?

He did not make his way into school textbooks and his story has not been lucky enough to find a director or a biographer who would have devoted a work to him. He was well remembered by his close associates, but over time they, too, passed away. I began writing the book Jan Sehn. Tropiciel nazistów more than half a century after his premature death in December 1965. To a large extent I had to rely on documents from the archives.

He was one of the first Polish lawyers who appeared at the Auschwitz camp after its liberation. What did he see there?

The ruins of the crematoria, human ashes, and piles of hair from gassed women. Nearly four hundred former prisoners still remained in the camp hospital – and it was May 1945. “Everyone […] is malnourished, skinny, [and] most bedridden patients remain in bed,” Sehn reported. Any freedom of movement around the immediate camp area was limited by the Soviet military authorities. In these difficult conditions, Sehn tried to secure evidence of the German crimes. “The search led me to dilapidated barracks, and to cellars flooded with water, from which one had to literally gather papers which were scattered all around the place,” he recalled years later.

The depth of material he collected during his investigations allowed him to write an extensive article on KL Auschwitz. It was one of the first, and most fundamental, studies on the essence and functioning of the camp.

Yes, Sehn’s report, Obóz koncentracyjny i zagłady Oświęcim (Concentration and Extermination Camp in Auschwitz), appeared in 1946 and received very favorable reviews. Sehn’s innovation was that he used numerous witness testimonies and original documents to describe the structure and organization of the camp as well as its function as a place of medical experimentation, slave labor and extermination. This text was later published as a book and was translated into numerous foreign languages.

I find his approach to work fascinating, given how unconventional it was for its time.

Indeed, Sehn was able to reach witnesses in an unconventional way. While conducting an investigation against those who had worked at Auschwitz, he took care to put photographs of SS men on public display in the busy areas of several large cities. He also made sure to keep the public informed via relevant messages in the press and radio. Today he would probably use Facebook and Twitter.

You describe Jan Sehn as a demon for work who had no time for holidays and spent all his time poring over documents.

In the first years after the war – until autumn 1948 – he took no holidays at all. And he did not slow down later, either. “A significant part of the work […] must be carried out […] outside office hours, at nights,” one can read in a certificate issued to him in mid-1949 by the District Commission for the Investigation of German Crimes in Krakow, which he headed. 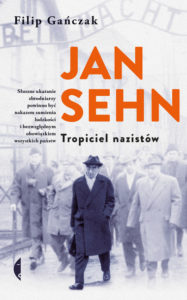 In your book, one can find references to the detention conditions of former Third Reich dignitaries. Amon Göth, Rudolf Höss and Josef Bühler could not complain about any bad treatment, they even had access to books in German. At the same time, thousands of soldiers of the Polish underground were subjected to inhuman torture by officers of the communist security apparatus.

The trials of German war criminals were expected to attract foreign observers. For this reason, the prosecutor’s office wanted to ensure “that the physical and moral condition of these prisoners should be as good as possible during the trial.” However, there are many indications that these were not the only guidelines important to Sehn. He had developed a humane approach to prisoners before the war, observing the methods of the Krakow investigating judge Marian Restorff, under whose wings he took his first steps in the legal profession. He was also fully aware that a well-treated criminal is more likely to provide extensive explanations. This proved true even in the case of Rudolf Höss.

Well, Sehn did manage to persuade Höss, the commandant of KL Auschwitz, to write an autobiography. How did he succeed?

He let him correspond with his family and read books in his native language in the prison cell. He even treated him to dinners during interrogation days. It was certainly not without significance that Sehn spoke fluent German. He was able to establish a close relationship with the interrogated without an interpreter.

When we talk about Sehn’s achievements, his commitment to take account of the past and put German criminals on trial comes to the fore. However, he also contributed to securing evidence of the Katyn massacre.

At a time when the communist authorities denied any Soviet responsibility for the Katyn massacre, and prosecuted those who dared to contravene, Sehn participated in preserving the so-called Robel’s archive, which contained documents attesting to the truth about Katyn, such as typed copies of the notes written by the Polish officers murdered in 1940. Fearing the documents would be destroyed by the communists, Polish chemist Jan Zygmunt Robel decided to hide the materials. With Sehn’s help, he later managed to find a new hiding place for his archive.

I asked about the Katyn case for a reason. We know that Sehn was a member of a number of political organizations and associations in Communist Poland, a fact which, today, can cause some mixed feelings, to say the least. What was his attitude towards the regime and the communist authorities?

In 1945, he bravely demanded that “the central Polish authorities make the Soviet army leave the Auschwitz camp and that the camp should be properly secured.” However, he apparently quickly realized that he had to make various compromises to be able to continue his career in a country ruled by communists.

Looking at Sehn’s achievements, do you think that enough effort was made in Poland after the war to properly and exemplarily punish German criminals?

When speaking of achievements, we should also not forget how many things were neglected. For example, the extradition of suspects started too late and too few people were involved. “Our work […] faces great difficulties due to a lack of office staff”, Sehn warned. Another problem was the lack of transport capabilities. Still, much was done. German researcher Henry Leide says that of the approximately 800 members of the Auschwitz crew who were held criminally responsible, most were convicted in Poland. Jan Sehn played a large part in this.

Manifesto of the Interim National Government 1863

159th anniversary of proclamation of the Act

After the Great War. A New Europe 1918-1923 – a non-obvious history of Central Eastern Europe

An interview with Dr. Bartosz Dziewanowski-Stefańczyk

The January Uprising from a revolutionary perspective, in 1863 and 1905

158th anniversary of the January Uprising