The organizers of the January Uprising, which broke out in the Russian partition in 1863, tried to win the peasant masses over to the national cause. The Insurgent National Government had drawn conclusions from the people’s insignificant support for the November Uprising and from the tragic Galician Slaughter. In the absence of a regular army, the support of the peasants was crucial to the success of the uprising. As early as January 1863, the National Government issued a decree enfranchising the peasants in the Kingdom of Poland. 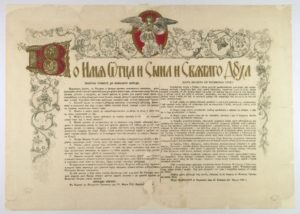 Two months later, on 12 April 1863, a similar decree, known as the Golden Writ (Pol. Złota Hramota) addressed to the rural population of Volhynia and Ukraine, was issued in Warsaw. The text, in Ruthenian, was printed in gold Cyrillic letters. The decree was part of the plan to prepare a national uprising in the whole the pre-partition area seized by Russia. The Golden Writ introduced personal freedom for the peasants, gave them their own courts independent of the lords, and enfranchised them on the land they farmed. It therefore made reference to social needs and sought to provide better conditions for the peasants than those proposed by Tsar Alexander II in his decree of 1861.

The document itself was arbitrarily modified by Marian Sokołowski, a National Government commissar, who halved the minimum area of land to be allocated to participants in the fight against the Russians. The impact of the decree was much less than expected. This was due not only to the cultural distance between the peasants and the nobility, which also existed in lands that were predominantly ethnically Polish, but also to animosities between the Orthodox Ukrainian people and the Catholic Polish nobility, which were exploited and fuelled by the Russian government. Just as in 1846 in Galicia, so now most of the addressees of the Golden Writ saw the uprising as a predominantly Polish cause spearheaded by the nobility. Although the Golden Writ did not bring the expected results, it was the last significant document written in the spirit of the community of nations of the former Polish-Lithuanian Commonwealth and has come down in history as an initiative aimed at joint action to restore brotherly independence and political understanding between the Poles and the emerging Ukrainian nation.

the beginnings of the democratic opposition in Poland

Poland never agreed to form an alliance against the Soviets

an interview with Dr. Krzysztof Rak

The Workers’ Defence Committee as a phenomenon of the Polish opposition

an anniversary of the creation of the Workers’ Defence Committee