Richard Butterwick, The Constitution of 3 May 1791. Testament of the Polish-Lithuanian Commonwealth. Download the entire book for free: epub | mobi | PDF 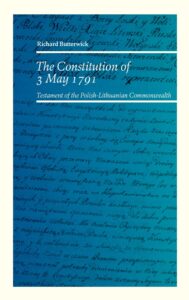 This year we are celebrating the 230th anniversary of the adoption of this Constitution. In your book you present a wider background and the paths leading to its adoption. One question which seems to come back again and again is: wasn’t the adoption of this fundamental law a belated effort?

Richard Butterwick: The solutions adopted in the Constitution of 3 May 1791, not to mention the persuasive strategies embedded in the text, were so strongly marked by the ideas and values of the late Enlightenment that it is impossible to transfer them imaginatively to the late seventeenth and early eighteenth century, when the Commonwealth’s factual independence and sovereignty hung in the balance. That said, the impressive resilience with which the Commonwealth soaked up invasions and coped with profound political and economic crises from 1648 onwards had run out by the end of the Great Northern War (1700-21). The failure of the political community – during the reigns of John Casimir, Michael Wiśniowiecki, John Sobieski and Augustus the Strong – to adopt fundamental constitutional reforms which would have prevented foreign powers from exploiting interregna and the liberum veto to keep Poland-Lithuania weak, fiscally and militarily, was decisive.

After the consolidation of Russian hegemony around 1720, all efforts to repair the Commonwealth would face obstruction and sabotage. Moreover, from 1763 onwards, Catherine II tightened the screws, compared to the looser Russian “sphere of influence” which characterized the reign of Augustus III (after Russian troops had won him the Polish-Lithuanian throne). Fundamental reform could only be undertaken during the Four Years’ Sejm, because the Russian Empire was then preoccupied with wars against the Ottoman Empire and Sweden, and was also threatened by Prussia and Great Britain. The sejm was therefore able to cast off the Russian “guarantee” of the Commonwealth’s form of government, without facing Russian revenge for three and a half years – a window of opportunity.

Richard Butterwick, The Constitution of 3 May 1791.

Testament of the Polish-Lithuanian Commonwealth